lcode[?]
Posted by Konstantinos Vasilakos at Sunday, November 25, 2012 No comments:

A gig, a trio and the harmfull audience - a short story 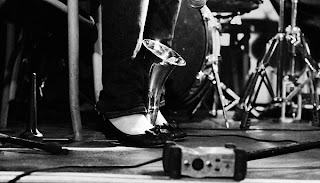 This photo was taken somewhere in the eastern part of The Netherlands where we were playing a gig with a short-time that happened to be, yet effective, trio I had during  my years in Holland, instead the glamorous sight of this photo the night was pretty much what can be characterized as a disaster, where the people turned to yell and mimic according the sounds coming out of the speakers, - almost like small kids make fun of a weird sound that they newly invented- and others just tried or looked like trying to decode what they were hearing but with no success, after playing for some minutes and realizing that somehow that needed to come to an end and give to other performers the step as well
I tried to find shelter at the bar where a person from the audience came by and overtly laughing started saying that the instrument which he couldn't even name it (oboe) reminded him something very funny which I hardly can recall now.
On my attempt for rationalization that night was that the people which happened to be there, were  what I would call farmers & short-minded but that would be a rather arrogant and easy way of saying, so thinking about that came to my mind something that I always was puzzled with in my mind (without a reason until that day & mainly by one of mine teacher)
"for Whom and for Where-amongst others- you composed that piece" then I conclude that things are happening for a certain reason, even not joyful things, that is, false targeting may become hazardous for the artist.
Posted by Konstantinos Vasilakos at Monday, January 16, 2012 No comments:

∞Is a three-part piece consisted by 3 layers of sound,
3 according to Aristotle is the number of everything "two are two three is everything".

Each layer of sound has its own movement independently from the other, but sharing the same purpose, the ultimate, primus movement.

The organization of the sounds occur from the relation among these objects, which comes naturally from what they represent.

These elements have they are own dynamic evolution but in the end they fulfil the one ultimate goal, The Ultimate Move.

The characteristics of the music objects are derived by the natural behaviour of the physical elements i.e. the earth sound object realizes a movement similar to the earth’s rotation on its axis.

However the consecutive structure of these objects is an acoustical abstract scheme without a chronological representation of the elements. Because this attempt is not an explanation of what came first and what pre-existed but is just a sound manifestation of these natural elements.

This work is based and conceived by Aristotle’s ‘pragmatia’ (treatise) «On Heavens» about his ideas in ‘Cosmology’ and theories of the elements that consists the universe, alongside the problem of its Uniqueness and Infinity.
The structure and design of the sound objects were produced imaginary, based on his description about these natural phenomena and elements, universe, sky and earth.
Posted by Konstantinos Vasilakos at Saturday, January 14, 2012 No comments:

This is my new blog, here I will try to upload most of all news concerning my music such as concerts & projects, amongst others.
Additionally I will post stuff that keep my mind busy and puzzled with.. a sort of diary.

Posted by Konstantinos Vasilakos at Saturday, January 14, 2012 No comments:

Konstantinos Vasilakos
A short CV: Konstantinos Vasilakos is a computer musician, he holds a Bachelor in electronic music (2009, Aegean College, Athens Greece, validated by University of Central Lancashire, Preston) and a Mmus degree in electroacoustic composition (2011, Utrecht School of Arts, The Netherlands) under the supervision of Hans Timmermans & Niko Langenhuijsen. Currently he is a PhD student at Keele University under the supervision of Mike Vaughan & Rajmil Fischman, awarded by the Research Institute for the Humanities of Keele University. His current research is focused on topics of Improvisation and live electroacoustic composition particularly in the gestural performance aided by alternative controllers.